Are you in a staycation holiday in Tagaytay and you are craving for the traditional Christmas Snacks like Putobumbong and Bibingka… Try this, 👇👇👇

🏠 Check this out 👆 if you are on the way or living nearby Silang Junction East Tagaytay City, Cavite 🏠

📱 You can click through foodpanda or online at their FB page below is the link..

Borawan Island is located at Padre Burgos, Quezon. It’s less than 30 minutes from our hometown in Agdangan, Quezon. And almost 5 hours away from Manila.

From the entry point at Padre Burgos, you can go for an island hopping in an hour at Borawan and Dampalitan Island. They named this island as Borawan with a combination of Boracay and Palawan, as they compared the color of the sand and the cliff that almost the same with this two tourist spots in the Philippines.

If you want to relax and want to try an island hopping that is nearby Manila, you can try this. I really love this trip. You can have a way to relax, swim and take beautiful photos with this nature.

And if you want to stay for a while or an overnight, you can try to check some of the resorts in a nearby towns of Agdangan and Unisan. One time in Year 2016, we planned to have a paradise getaway in Maldives. Maafushi is a public island in South Atoll area. This is our second choice, we wanted to go to the North Atoll area but unfortunately our contact never showed in the airport.

We arrived at the wee hours of the night at Male Airport, the normal timing for a promo fare. Luckily when we are searching on where to go there was some tourists that going to this public island and they were suggesting to share with them at their rented speed boat. Then when we know which place, we searched and booked an accommodation on one of their public island.

This trip was really not what we planned instead of being pissed-off because of what had happen, I tried to see the bright side and think faster on what should we do. Once arrive and check-in at the hotel, I approached the receptionist who was also the owner of the resort, if they have an available island hopping tour for the next day so that we would not waste our time then we booked it.

I travelled a lot of beaches and islands from our country in the Philippines, Malaysia and Thailand but this place specially the big waves in the Indian Ocean was quite scary but I put my trust on the boatman of the speedboat as he knows what he was doing. And this was my first time riding a speedboat in an open ocean and a wider horizon. While going to the sandbar, we saw a lot of mantra and dolphins on the way, I really enjoyed watching this water creatures swimming on their own world.

The Maldives sandbar is really a white fine sand and you really feel that you were alone in an island though I know that this was an effect of global warming but still I’m amazed on how it would have a shallow one in the middle of this dark blue body of water.

We also visited a private island which we took our lunch and have some photo ops. The ambiance and serenity of this private island was really great at least we explore and experience it.

On the third day, we tried to check the culture and how the people way of living in Maafushi on their normal days. Because tourism is one of their income generating business, they start their day keeping themselves busy in accommodating guests and in cooking the best breakfast for the tourist and most of the resort was doing this. There was also the ILY coffeeshop that you can go and have a sip of your favorite coffee but you can try the housebrand coffee on your hotels. I like their spicy food and grilled seafood. They can accept USD and Maldives Rupiah if you want to buy something in the island.

On the fourth day and last day going to the Airport we tried their public taxi boat that cost USD2 per pax but it will take longer trip. We arrived at Male City, there was still time that we can roam around and took some pictures before going to airport.

This was really one of my adventure in travelling even it doesn’t start properly but ends well and still we enjoy the trip.

One of the itinerary in the Island tour is visiting a private island to have some lunch and we choose this resort.

We stayed for a few hours just to take some pictures and enjoy their shoreline, it’s really a nice place and you will feel the serenity even they have a lot of guests.

Please see my rating below as 1 star for the least or unsatisfactory and 5 star is the most satisfactory feeling for me. Overall its a 5-star.

Cleanliness of the Hotel/Hostel

Services given by the Staff

Value or Cost of Accommodation 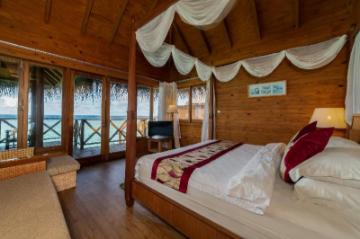 The receptionist on the time when we arrived at wee hours in the evening was the owner itself and she was very accommodating. She and her husband who suggested that we go for an island hopping early in the morning so that we can enjoy a dolphin and mantra ray watching.

I never see the beauty of the lobby when we arrived because it’s night time and we were already tired. But when I woke up early in the morning, I was mesmerized by the ambiance, it’s really refreshing and relaxing for the wooden interior. You really feel that you are in a holiday.

Our booking had breakfast included, I like their spicy food and the fresh grilled fish plus the tropical fruits.

We really appreciate the hospitality of the team.

Please see my rating below as 1 star for the least or unsatisfactory and 5 star is the most satisfactory feeling for me. Overall its a 4-star.

Cleanliness of the Hotel/Hostel

Services given by the Staff

Value or Cost of Accommodation

If you want to check the availability of this on your preferred holiday, please click the below picture.

We had this Bali Trip last May 2018, we were thinking of the movie Eat, Pray and Love and the adventure of the actress, Julia Robert as Elizabeth Gilbert.

To lose balance sometimes for love is part of living a balanced life.”

Elizabeth Gilbert, Eat, Pray, Love: One Woman’s Search for Everything

“Happiness is the consequence of personal effort. You fight for it, strive for it, insist upon it, and sometimes even travel around the world looking for it. You have to participate relentlessly in the manifestations of your own blessings. And once you have achieved a state of happiness, you must never become lax about maintaining it. You must make a mighty effort to keep swimming upward into that happiness forever, to stay afloat on top of it.”
― Elizabeth Gilbert, Eat, Pray, Love

This is why we travel in this place, we want to feel the happiness that the character feels, away from a busy life even for days. And to know how their culture and how it can motivate one person to be happy. We experienced the beauty of nature from the rice fields, the falls and their beaches. We enjoyed their spicy food and crackers. We really love this place.

And our itinerary is

We booked our accommodation on these cute and relaxing places: 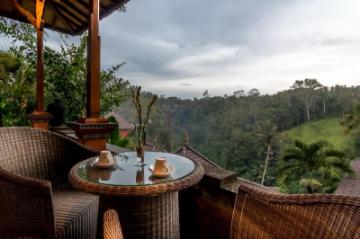